Mild Paint Correction on A Senator

On recent conversations with good Ol Joel from Zas, I discussed with him what a good one pass product  would have been that could be used with a Flex buff or even a general DA for the purposes of removing swirling, webbing or even marring from other compounds. Not using fillers. Clearly removing surface damage. Now remember, this was just for one pass. These are not car detailing polishes or compounds

Joel was quick to recommend Optimum paint correction products as for my requirements. Never used these products before but without getting into all the details here, I think we all understand the basics. 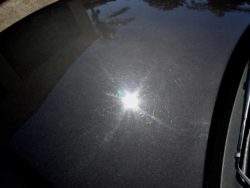 I never really took any process photos of this product because I had no intentions of posting anything about it. I now greatly regret this because it really is a great product.Especially when you follow through and complete the job with some of the best car paint protection on the market

I initially started with a CCS pad ( white pad ) and proceeded to commence over the Senator that I was working on. Now, I have very much been a rotary man pretty much all my life and have seen immense results using these complex machines. I have used DA plenty of times but with various conversations here and there and strong recommendations from other detailers in this industry of ours, I went and eagerly purchased the new Flex DA.

As stated earlier, having started with the new CCS pad ( white ) using the Flex and optimum polish two, I put this combination to the test. The Flex I have to admit is one wicked machine and really should stay strictly in Pro hands in my opinion anyway. It will definitely burn paint if ill abused by wrong hands. A lot of GRUNT for a DA.

On initial inspection after doing one pass with the Optimum and the Flex, I have to admit it, it didn’t quite cut out as much as I would have liked. Obviously the product has improved the surface remarkably but not quite there, the combination obviously stands to be in the way somewhat.

This is obviously a change in speed or pad requirement. I did not want to change the compound or the machine to further alter the test with this product. The idea is to remove as much damage as possible without inflicting swirl marks or using fillers.

I first initially took the speed of the Flex from 4.5 Straight to max speed to see if there would be an improvement I did notice some further cutting ability due to more heat being generated but still not quite good enough. This tells me that either more speed is needed ( making the Flex not quite speed worthy for cutting damage with this type of polish )  or a change in the pad density or cell structure.

When I tested the Flex at max speed using the Optimum compound in warm conditions, this actually stained the paint. Not good. So, to further test this product, I changed the pad and shifted straight to a cutting pad with still the Optimum polish and again reduced the speed to 4.5 from maximum. Results came up immediately just by changing the pad.

I’ve always said that if you have to run a DA at full speed to get cutting ability, then there is clearly something wrong with the combination. I also realise this anyway
because when I ran the Flex at full speed with the Optimum cutting compound I discovered the cutting ability of this product ( in hot conditions ) dried up really quick and
stained paint instead of cutting. I also find the Flex can be quite a machine to hang onto when using the Optimum products. It really drags because this is a non dusting product or oil based somewhat. Having  said this. Optimum on the other hand is an outstanding product for one pass procedures and definitely will be using this product even further.

The Flex on the other hand will definitely remove serious damage as much as a rotary but find you really need to increase the speed of the machine to Max to get strong cutting ability ( and not in hot conditions ) because the Flex really warms up fast in hot conditions. it still doesn’t quite cut serious damage as quickly as a rotary with speed and strong pads. Although you may save time with the rotary, you will inflict swirl marks which just means you’ll have to do another pass to remove swirling. Catch 22 I suppose.